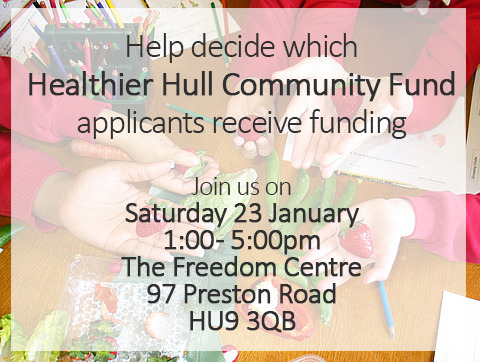 Hull Community Fund project funding this weekend and throughout February.

The fund, which is in its second round, aims to support local groups through funding projects that are aimed at improving the health and wellbeing of people in Hull.

In the first of four public voting events, members of the public are invited to join the CCG at The Freedom Centre, 97 Preston Road, Hull, HU9 3QB, on Saturday 23 January from 1:00 – 5:00pm.

During the event Healthier Hull Community Fund applicants will present their ideas for creating a healthier Hull and be quizzed by a panel of health leaders around the health and wellbeing benefits of the project. The audience will then vote to award funding based upon what they have heard during the session.

“The Healthier Hull Community Fund is an innovative way to engage with people in Hull to ensure we are funding projects that people living in the city really need. We know that the people living and playing a part in the local community know best what is needed to create a healthier Hull, so it makes sense that those people have their say in the funding process.”

Previously, in 2013/14, the Healthier Hull Community Fund provided grants of up to £5000 for a wide variety of projects including those aimed at getting people back in to employment, reducing isolation in the elderly and integrating communities. The CCG awarded close to £360,000 in funding and helped 79 projects achieve their ambition to create a healthier Hull.

Organisations, non-for-profit groups and charities applying for the 2015/16 round of funding have aimed to build on work already underway in the community and also bring new ideas and projects to local communities to improve the city’s health and wellbeing.

“We’ve seen an outstanding number of applicants for the fund this year and many of the projects are ideas which we haven’t seen before. Alongside this we can see how existing Healthier Hull Community Fund groups are going to build on the work they have been doing for the past year or so.”

“We saw in 2014 how the fund has made a huge difference to the lives of those living in Hull, with around 22,500 people in Hull being supported by groups involved in the fund. This year we expect to see an even bigger impact to people living in the city.”

Members of the public wishing to attend the voting events are asked to register their place by clicking here and completing the registration form.