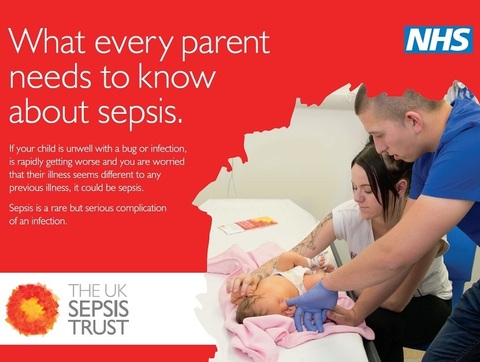 A sepsis awareness campaign, supported by UK Sepsis Trust, has been launched to raise awareness of the key symptoms of sepsis amongst parents of children aged 0-4.

Sepsis is a rare but serious complication of an infection. Without quick treatment, sepsis can lead to multiple organ failure and death.

The UK Sepsis Trust estimates that there are more than 120,000 cases of sepsis and around 37,000 deaths each year in England.

Acting quickly could save a child’s life. The campaign encourages parents of children aged 0-4
to go to A&E immediately or call 999 if they have any of the following symptoms:

Looks mottled, bluish or pale
Is very lethargic or difficult to wake
Feels abnormally cold to touch
Is breathing very fast
Has a rash that does not fade when you press it
Has a fit or convulsion
For more information visit nhs.uk/sepsis or sepsistrust.org