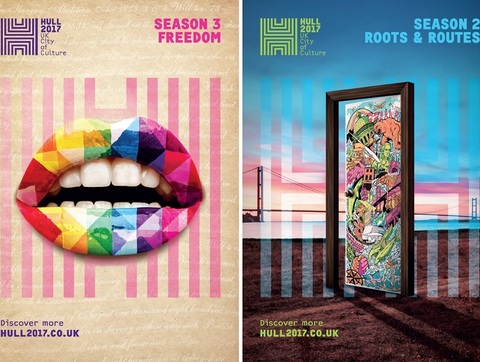 Hull UK City of Culture 2017 today unveiled details about seasons two and three of its year-long cultural programme with 42 new commissions and world premieres, 24 festivals and 13 new exhibitions amongst hundreds of events and activities taking place from April to the end of September 2017.

The two seasons, Roots & Routes (April to June) and Freedom (July to September), continue Hull 2017’s commitment to inspiring and entertaining residents and visitors alike, as well as asking questions and raising debate. From art to music, from theatre to film, and dance to family friendly activities, there is something for people of all tastes and ages, with more reason than ever to visit Hull.

The aim is to build on the success of opening season Made in Hull, which has drawn hundreds of thousands of people to the city.

Martin Green, Director Hull 2017 said: “The response to our opening season Made in Hull has exceeded all our expectations and as we go into seasons two and three, we want people to continue to be excited, whether they live here or are visiting. With our wonderful partners there’s a terrific line-up over the next six months.”

Councillor Stephen Brady, Leader of Hull City Council, said: “With season one almost completed, the signs are that Hull is going to be one of the most successful cities of culture there has ever been. The seasons two and three events, revealed today, show a world-class programme that will continue to engage, excite and enthral local residents and visitors throughout spring and summer.”

To find out more visit the Hull 2017, City of Culture website.