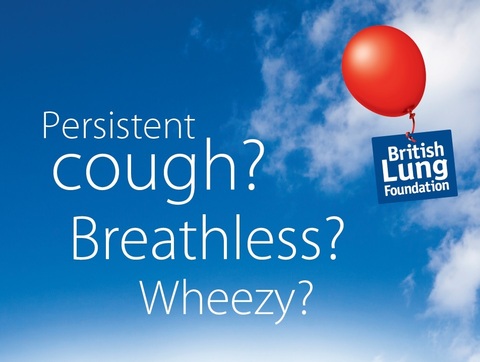 COPD encompasses a number of conditions which narrows the airways, causing people to have difficulty breathing. Hull has been targeted for this campaign because of its very high rates of COPD compared to other areas in England.[i] People in Hull are also around two and a half times more likely to be admitted to hospital with this condition than the average for Great Britain.[ii]

Though around two million in the UK are estimated to be living with undiagnosed COPD,[iii] a British Lung Foundation survey found that fewer than half of us would be concerned about one of the most common signs of lung disease – unexpected breathlessness, much less see a GP about it.[iv]

Now, people in Hull will have the opportunity to get their lungs checked by qualified respiratory nurses while they shop. The Love your lungs campaign encourages those who have had a persistent cough for three weeks or more, or who feel unexpectedly breathless, to come along and speak to the nurses on hand providing free advice, information and lung function tests.

The events will take place on:

“We want to encourage people to think about the health of their lungs. Have you had a cough for more than three weeks? Are you constantly short of breath? These could be warning signs and shouldn’t be ignored.

“It’s a pleasure to work with the British Lung Foundation. The upcoming events are a brilliant way to step right into the heart of our communities and spread this very important message. If these symptoms strike a chord with you, visit us at one of our sessions for a free lung screening. Alternatively, speak to your GP.”

“We’re inviting everyone in Hull who feel breathless doing everyday tasks or has a persistent cough to come along and get their lungs checked. It’ll either put your mind at rest, or start you on the right path to getting a diagnosis and doing something about it.

“If you have a lung condition, early diagnosis and treatment is the key to managing it, preventing further irreversible lung damage and really improving your quality of life. There’s also plenty of support available in the area to help you take care of your lung health – from Stop Smoking Services, to local Breathe Easy support groups.”

[i] The Quality and Outcomes Framework data shows how many people registered with a GP are listed as having COPD. Hull ranked 22 out of 209 CCGs for COPD prevalence in England. The data also shows that almost 7850 people in the Hull CCG area have COPD. http://www.content.digital.nhs.uk/catalogue/PUB22266

[ii] British Lung Foundation, 2016, Battle for breath – the impact of lung disease in the UK. https://statistics.blf.org.uk/copd

[iii] NHS England, 2013, Health and high quality care for all, now and for future generations. Section 6.2, Earlier and acute diagnosis of COPD,