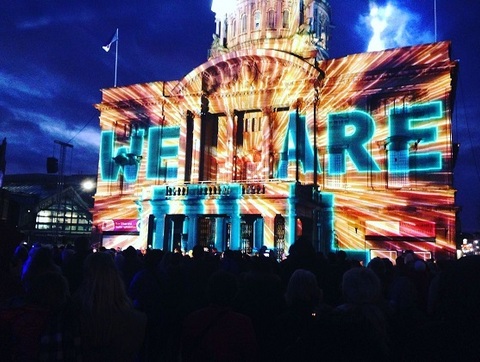 Be energised, get out and about and take part in the excitement of Hull’s year as UK City of Culture.

That’s the message to people across the city following the success of this year’s opening event, which saw more than 342,000 attend Sean McAllister’s Made in Hull and the installation of Blade by artist Nayan Kulkarni in Queen Victoria Square.

With hundreds of other events and activities set to take place across the city throughout the year the team at Hull 2017 alongside Hull City Council are encouraging residents to capitalise on the energy and excitement in the city, generated by its first week in the spotlight.

Make It Happen is a five-step campaign encouraging people to get active, get involved and feel inspired by their city.

Martin Green, CEO and Director, Hull 2017, said: “There’s real buzz in the city since Hull took centre stage on New Year’s Day. We want everybody to ride the wave of excitement and take an active part in what is going to be an unforgettable year.

“Don’t sit on your sofa watching it on TV or reading about it on social media, get out and be part of it.”

There are five parts to Make it Happen: Take Notice, Be Active, Connect, Keep Learning and Give.

With the installation of Blade, there has never been a better time to get out and take notice of what’s around you.

Blade is the first in a series of major art commissions that will be installed in public spaces around Hull as part of Look Up, a year-long programme for Hull 2017 that will see different artists creating temporary artworks designed to make people look at and experience the city in new ways.

The campaign, which runs throughout 2017, is funded by Hull Public Health.

Cllr Gwen Lunn, Portfolio Holder for Public Health at Hull City Council, added: “Hull 2017 is for everyone. From volunteering at an event to buying a ticket to see a show, there are lots of ways that you can be part of the story. But it’s not all about art and culture, that’s just one part of the story.

“There are so many other ways that you can get involved and feel good in 2017. From making a small change, reaching out to a neighbour or learning something new, you may not realise it but you will be playing a part and contributing to the lasting legacy of Hull 2017.”

The five strands of Make It Happen:

TAKE NOTICE (Jan, Feb and Mar 2017)
Look up, look out, look around you. We’re not ones for stating the obvious but life’s a lot more exciting when you make the effort to notice and engage with what’s going on around you. Hull 2017 is full of surprises – 365 days of them in fact – so don’t miss out.

BE ACTIVE (Apr and May 2017)
Even if heading out for a run isn’t your thing, there are endless ways to get out and about in our beautiful city. Take a walk around an area you’ve not been to for ages, cycle to an event instead of taking the car or learn a new dance. Let 2017 be the year you discover a new activity and make it part of your life.

CONNECT (Jun, Jul and Aug 2017)
Don’t be shy, make the first move and connect with the people around you. Some of the city’s longest standing community groups began with an individual ‘reaching out’ to their neighbours. Strike up that conversation and see where it takes you.

KEEP LEARNING (Sep and Oct 2017)
Learning new things keeps the grey matter ticking along and can give you a sense of achievement and a new confidence. Visit the History Centre to find out about Hull’s past, try your hand at life drawing or learn to play a musical instrument – you’ll be glad you did.

GIVE (Nov and Dec 2017)
We’re not suggesting you give away all of your worldly goods. But the smallest act of giving – a smile, a compliment, a thank you – can go a long way. Bigger time commitments, such as volunteering, give you the opportunity to play a more active role in the Hull 2017 programme and contribute to its legacy.