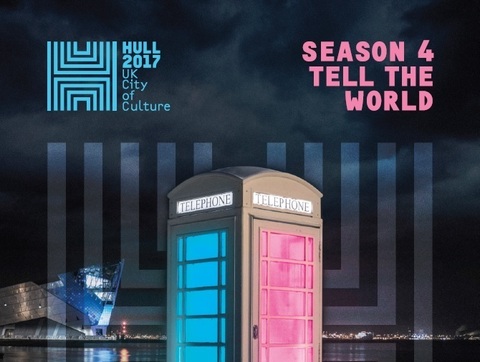 Hull UK City of Culture 2017 today announces details of its fourth season Tell the World, which runs from October to December.

The response to the year has exceeded expectations and the city’s thrilling journey as host to the nation’s cultural quadrennial continues with major new commissions and celebrated artists.

Working with a host of partners, Hull City Council, which successfully bid to secure the title in 2013, Tell the World brings theatre and live performance, literature, visual art, festivals, spectacle and more.

There are events and activities across the city to entertain, challenge and bring people together, cementing Hull’s reputation as a cultural destination, with a profile that is growing nationally and internationally.

Returning and continuing events include Back to Ours, the popular festival of music, performance, film, art and circus brought to the heart of local communities; the Creative Communities Programme, which has seen 60 projects across the city; and the No Limits learning programme, which has ensured that every school child in Hull has had the opportunity to take part in the City of Culture year.

Tell the World also reflects on how Hull is redefining itself, celebrating the qualities that make it a fabulously unique city. In December Substance brings together artists, thinkers, commentators and creative mavericks and visionaries for a weekend of art, performance and debate that focuses on Hull and the North’s future as a dynamic cultural and creative powerhouse.

Martin Green, Director of Hull 2017, said: “2017 has by any measure been a revelatory time for Hull and with season four, the thrilling journey continues. We’ve an outstanding programme to take the UK’s first cultural quadrennial into 2018, which will challenge as well as entertain, ask questions and bring people together. The city’s new found confidence and its growing reputation for culture and creativity help lay the foundations for Hull to take its place as at the heart of the North and in the nation’s cultural future.”